You are here: Home / Encouragement / Is Your Husband Flawed? 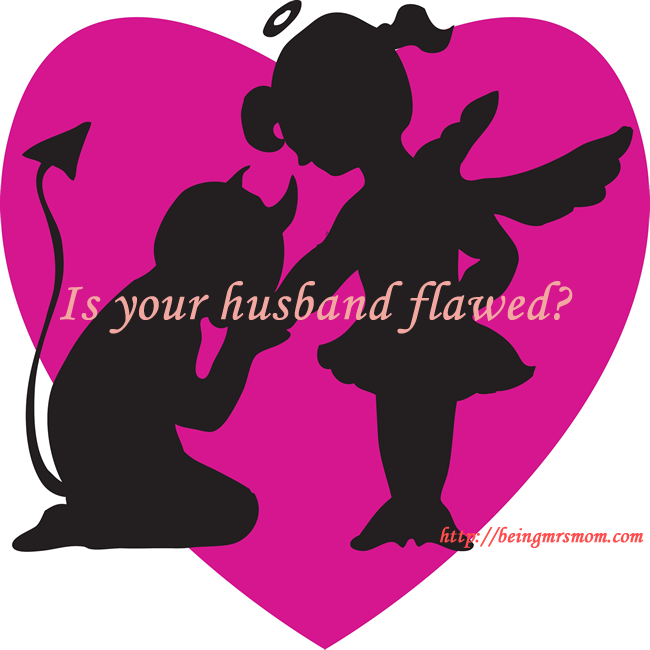 When I first married my husband, I was convinced that he was a great guy.  I knew that he would always love me and show me that he cared.

As we moved into our second, third, fourth, and even fifth year of being married, I could see his flaws more than I could see them originally.  I considered how I thought he had changed and was determined to help him remember the qualities that he had possessed before, which qualified him for the “great guy” category.

What I did not know was that he had always been a flawed individual, but because of the love, passion, and desire that I had for him, I could not see them.

When we were dating, my husband would show up early for our dates.  He would ring the door bell and then patiently wait for me, on the couch or in the car.  When we arrived to our destination, we were always early.

Later on in our marriage, he would get ready and promptly remind me of my need to speed up, as I got dressed.  He wanted us to arrive early to our destination, but I was taking my time getting dressed.

Over the years, I had tried to change various aspects of who he was, but learned that it was more difficult to change him, than it was to change something in myself.

What I mean is that I started to ask myself why certain aspects of his personality seemed to be flaws to me now, when they were not flaws to me before…

He had always been very punctual…nothing had changed about him.

He helped me to see that I wasn’t perfect, but He never considered me so flawed that I could not be loved.  He showed me that He had actually given me time, as He would continue to in the future, to get past certain struggles and be the woman that he created me to be.  He showed me that there were various aspects of myself that would need to be changed before He would consider me mature.  Yet that never changed how He saw me.  It never changed the fact that He considered me precious and lovable.

Learning to see myself through God’s eyes, helped me to see my husband in the same way.  I began to accept who he was and his “flaws” became characteristics that I cherished.  Our differences came to be the strengths of our marriage, when previously, I had considered them weaknesses.

Today, I am a more punctual person.  Although I still struggle with consistency, my husband’s ability to remain consistent will definitely rub off on me, I’m sure.  I consider that my perspective is often times what needs to be changes, not my husband.  God will and does work on him, but my job is to allow Him to work on me.

I love my husband more and more each day.  I cherish the ways that he sharpens me like iron, even when it’s not comfortable at the moment.  When I look back on it all, I am thankful.

Can you relate to what I have said here?  Do you find it easier to identify the “flaws” of your spouse that it is to identify your own flaws?  How can you change your perspective and actions to make the weaknesses of your marriage the strength of your marriage?

Don’t Be So Hard On Yourself

Communicating With Your Husband

The Importance of Being Authentic